Specs of the Asus Zenfone 5Z

Build of the Asus Zenfone 5Z

I’ve always appreciated Asus’s take on the build of the phone. This year with the 5Z it was just perfectly polished one. I must say choosing the glass back felt premium and sturdy device of the all time. It wasn’t just the back of the device but the front of the device which made the phone correct in all the check boxes. The Asus Zenfone 5z does have an iPhone style notch at the top but a shorter and a perfect notch. I will mention why it’s an ideal notch in the software area.

The placement of the fingerprint scanner was just perfect; I didn’t have any reachability issue. The volume button and power On/off switch is on the right. The placement is just perfect, and buttons are tactile with same texture to both. The phone has a little petruding camera at the back. You could fix that using a case present in the box. For the Build Quality, I will rate the device. 8.5/10

I didn’t expect out of the screen with the device. This time Asus just figured out the Best 1080p display with the notch. We tried to compare it with the OnePlus 6 the display on the Asus Zenfone 5z was little more better at color reproduction. The viewing angles of the screen were fantastic.

You might say me that you hate the notch. Trust me when it first came to our labs I had the same opinion but when I started to use the device on daily basis it just felt awesome. I become addicted to the notch type phone.

It comes with a Flagship grade processor that is the smapdragon 845 which performs super well. Not just on paper but on day to day usage you feel using the best phone you could. Gaming on this phone is really good. The phone would get heat while playing PUBG but didn’t affect on the frame drop. I don’t have the temperature scores but I would say it’s bearble heat.

For a really long time my complaint to was with the software experience. The heavy UI use to make the experience bad but in 2018 I must say they fixed it. The device is well optimised that you won’t be disappointed. In the review span itself I’ve received 3 good software updates which have definitely enhanced the experience. When I unboxed the phone I had issue with the face unlock it use to work 6 out of 10 times. After the update it was 8 out of 10 times in different situations. When I unpacked the device the camera only supported OIS for 1080p 30fps after the update it supported for 4K. In lot of the areas Asus was doing well. Trust after the update they also added guesture to remove the bottom 3 buttons. The guesture became my daily driver and I miss it in every other phone which doesn’t has it.

A top notch phone with not a top notch price definitely expands it’s limit for Value for money. Ask for the feature you want in the device you will have it for sure with the Asus Zenfone 5z. It’s a real competitor the OnePlus 6 and almost nails out in most aspect with the OnePlus 6. The device base varaint starts at RS. 29,999 to RS 36,99 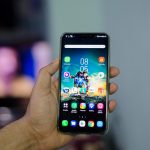