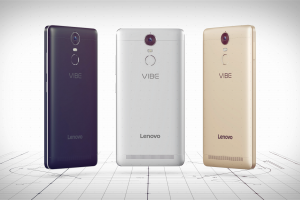 Smartphones ranging between 10,000-15,000rs had played a significant

Role in the in mobile phone industry in India. If we look totally then overall most sold, phones are also in between this category. There are so many competitors for the Lenovo. There use to be Lenovo Vibe K4 which gave tough competition to these phones. Lenovo now decides to launch Vibe K5 to update its game in better and immersive way.

The Lenovo Vibe K5 Note has an AntVR like the Lenovo K4 but this time, the VR is much improved and way better that what Lenovo claims via Theater Max. You don’t need special games or movies, especially for the Virtual Reality. Levono will convert the existing content to immersive large screen media. That makes the current content much vivid and immersive sound. For gaming and hands-free control, along with the ANTVR glasses, consumers can also get the TheaterMax controller for media control. For gaming enthusiasts, Lenovo has tied-up with Amkette to bring the Evo Pad 2 as a precision controller for TheaterMax gaming.

For style, the phone does with 3 Colours platinum silver, champagne gold and graphite grey colour options. The design is symmetric and looks excellent.